Are Women Their Own Worst Enemies? March, Don’t Trample

Despite the marches and numerous empowering talks and conferences by and about women, I still see too much insensitive and biased treatment. The surprising thing is that sometimes it starts with women. Some of the most judgmental and negative behavior I have witnessed, has been woman to woman.

I am not alone in this observation. A book called “Twisted Sisterhood” (2010)  reveals an undercurrent of woman to woman nastiness. Of the 3000 women surveyed by Author Kelly Valen, close to 85% “admitted having suffered serious, life-altering knocks at the hands of other women.” You can read the full article here.

I am an advocate for women and for gender equality.  I also feel women need to walk the walk and lead by example. This starts will teaching young girls that forming cliques in school – think of the movie “Mean Girls” -should not revolve about unfairly judging or excluding individuals for the way they look, dress  or talk, or where they come from.

But the “mean girl” behavior does not end when women become adults. I’ve seen exclusionary cliques form within women-only professional organizations with a deliberate attempt to exclude other women. And I have heard adult women make petty remarks and observations about other women that have made me cringe.

“I don’t think she likes so and so.” “Did you see the way she’s dressed?” “She looks worn and tired.”  “She doesn’t smile enough.” “I think she’s standoffish.” “I don’t think she fits in.” “I don’t really like her.” None of these comments have to do with one’s capabilities, only appearances and subjective impressions.

Reality television shows feed on women behaving badly to each other. But in the real world it’s insufferable. Women who complain about being treated badly by the opposite sex in business need to take hard look at how they are treating each other and set standards. Women friends have shared experiences of being passed over for jobs or assignments by other women even when then they were highly credentialed as well as being marginalized in other ways. The sisterhood can become pretty petty, and that is not good.

I’ve been a boss at my own company and, reflecting back, I could have done better. I’ve also worked with and for women and feel they were some of the toughest people to deal with. Some of my best mentors have been men, and some of my harshest critics have been women.

So let’s take action this way: Boycott television shows that show women behaving badly. Be more kind and compassionate to women you work with. Stop criticizing. Be sensitive to the fact that no one is perfect, not even You. 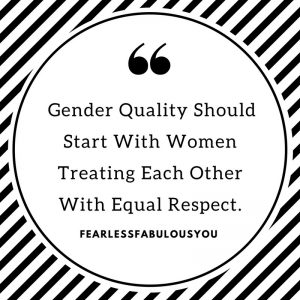