Once In A Blue Moon

Last night, August 31st, was a Blue Moon. By definition, a Blue Moon is an extra full moon in a season. Usually there are three full moons, and a Blue Moon makes four.  It is an astronomical rarity that happens about 2.7 years apart. The last Blue Moon was December 31, 2009, and I was oblivious to it since I was in the throes of chemotherapy, a rare and hopefully one-time occurance that certainly made me blue and moon-faced with the pallor of wax and wan. The next Blue Moon will take place July 31, 2015, too far into the future to think about.

So last night, after we co-hosted, “Bottoms Up!”  cocktail hour, discussing rum and drinking fresh-made daiquiris, I said to my husband, David. “It’s a Blue Moon. Let’s step outside and strip down naked on the deck, dance to “Blue Moon” and “Moon Dance,” swig shots of moonshine and sleep under the stars.” The full moon shone brightly over the trees, and I swear I saw hints of blue in the moon shadows. The soft breezy air was intoxicating, as was the moonshine…..It was a marvelous night for a moon dance.

Well, neither of us ended up stripping down naked because it was buggy out. We did swig the moonshine, and I swayed to the music while David started to set up a pup tent. But by the time he finished getting that damn tent up on the back deck I was nestled in our bed with my fluffy white down comforter and equally fluffy new small white dog, Sazerac, deeply mellowed from the moonshine.  So the stars didn’t quite allign for us to sleep under them, and David decided the tent smelled funky and needed to air out anyway. Instead, we slept under the moonbeams that streamed in from the skylight over our bed, bug free and carefree. The tent is still sitting up outside, so maybe tonight’s the night….

This season of the Blue Moon I decided to step out of character, or out-of line if my work-focused father were still alive and commenting. I moved upstate, traded heels for comfy sandals, career clothes for tie-dye and t shirts and shopping at clothing boutiques for shopping at farm stands.  I dialed down from powering up all the time and found out that taking a break from the fast lane wasn’t so bad.  Will it last? Doubtful. Projects beckon, and Autumn will get busy in the wine and food world, and the gal still has to make a living. And when I picked up a copy of Crain’s NY Business my mind started bubbling with new ideas for business and bursting with the desire to make something new and meaningful out of my life. But I like the idea of shedding my old skin for a new one, and retooling my lifestyle to refuel my inner drive.

This August I learned that life doesn’t always have to be “go- go- go” all the time, pursuing one client or accomplishment after another or traveling far and wide to discover peace of mind . It is important to step away and get some perspective.  And sometimes it means slowing down instead of speeding up.

Shakespeare wrote, “All the world’s a stage and men and women are merely players.” We are all just characters living out our roles in life but we don’t have to keep the same roles forever. There are no rules unless you choose to make them. And, once in a Blue Moon, maybe it’s time to break the rules!

I think David started out perplexed at my new found domesticity this Summer, something I truly am not. He likes to cook dinner. I like to book reservations out at restaurants. He likes to wash the dishes. I like to read the dish in fashion and social magazines.  He likes to climb rocks. I like to wear rocks. He likes to putter around the house. I like to plan trips to get away.  But by this August, I turned about face and nested, weeding the garden, weeding out my drawers and weeding through the remants of my formerly stressful life.  David appeared pleased, and proud that, just maybe after nearly nine years of being together and five now married, his Type B personality has tempered my Type A one.

Last night he wrote on Facebook (Yes, I follow my “Rocks-Stars” husband on Facebook.) “Tonight my wife Melanie cooked me dinner, set the table, and even did the dishes, Thanks Sweetie! Was that something I can look forward to again in the future?” 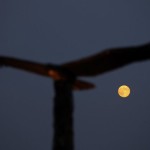 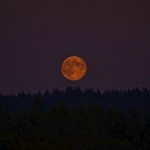