Serendipity. It’s a word I have been thinking about alot, and for good reason. Sometimes, I truly believe that things happen in life due to serendipity. We can all be captains of our ships to a point but, like a vessel on the sea, when nature stirs things up in a maelstrom, you have to change your course.

This past weekend I attended a “Woodstock Wedding.” It did not take place in the town of Woodstock in the Hudson Valley. It took place at the site of the original Woodstock back in 1969 in Bethel Woods near White Lake, NY. The bride and groom met through – here’s that word: Serendipity.

The bride is a beautiful “Dead-Head” (as in a follower of the Grateful Dead, like my husband, David) in her midlife and never married, traveling the U.S. attending concerts and serving as a caregiver to families. The groom is tour manager for Lady Gaga and the band Furthur, an incarnation of the Grateful Dead with a few of the original band members as leads. She was a confirmed single woman, comfortable in her place. He was traveling the world managing bands looking for a base.

During a chance encounter backstage at a Further concert, the two met and connected instantly. It turns out they both attended the same Connecticut sleepaway summer camp as kids. Relatives and friends were entertwined in different ways. Yet, decades later from their original New England roots, and after traveling around the country with bands, he laid his proposition down and serendipity brought them to Bethel Woods last Sunday evening where family members and close friends- dressed in both hippie tie-dye and East Coast prep- plus several thousand concert goers celebrated their marriage. The band Further played that night; Bob Weir officiated the wedding ceremony. The bride wore traditional white; the groom donned an African designed vest and tie with a poignant story behind the ensemble.  Many years ago, one of the bride’s young charges sent her the vest and tie from Africa with a note that said, “Some day you will meet a man worthy of you who will wear this vest and tie on your wedding day.” 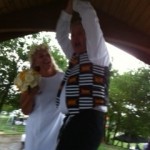 The band peformed a custom play list “DEADicated” to the newlyweds. We followed the couple as they paraded and danced through the cheering throngs of Dead-Heads celebrating life, love, peace and happiness… and two people that found it all through Serendipity.

According to many posts online and as author Dennis McNally wrote in his book, Reading The Grateful Dead: A Critical Survey “Serendipity is the very root of the Grateful Dead.”

Maybe is was the sweet scent of marijuana in the air. Maybe it was the shots of Frida Kahlo Tequila we drank to toast the bride and groom. Maybe it was the sight of the crowd of tie-dyed concert goers swaying and dancing under the spiral light of Venus surrounded by the mountains of Sullivan County foggy from the blue light rain. Serendipity filled the air, and living in the moment was all that mattered.  Everyone was in their Dead-Zone.

I think Serendipity brought my husband David and me together. Flash back 2003 to a dinner party given by his ex girlfriend and my dear friend, Sophia. Dozens gather at a non-descript Italian restaurant below Ground Zero in Lower Manhattan that a few of us “adopted” after the terrorist attacks to symbolize the importance of supporting downtown businesses. I walk in; he was the first person I saw. I did not recognize him with a shorn head; it had been many years since we had seen each other.  We connected instantly and exchanged numbers. Strange: If September 11th had not occurred, would we have adopted Giovanni’s Atrium? Would David have been in the process of relocating back to Manhattan? Would Sophia have hosted the dinner party? Would our lives be different today? Even unexpected good things can grow out of the horrific.

Serendipity by definition means “finding valuable or agreeable things not sought for- a pleasant suprise.”  In other words, you cannot seek serendipity. It lights upon you, often when you least expect it. It’s a gift.

The best way to experience serendipity is by living your life and pursuing what you enjoy, what you believe in and what you can share with others. I truly believe that by doing this, serendipity, will find you.

And when it does, you are truly blessed.